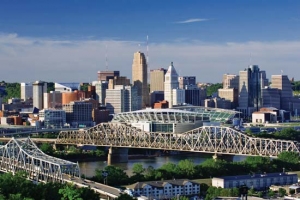 Join us in Cincinnati, Ohio for the 2019 Beta Alpha Psi Midwest Regional Meeting. The meeting includes a keynote speaker, an alumni panel, presentations on chapter operations, the best practices competition, and presentations by successful professionals. This meeting offers unlimited opportunities for professional development, networking with professionals and other students, honing leadership skills, and sharing valuable ideas about chapter operations and best practices. Bradley University and Western Michigan University look forward to hosting you!

The Best Practices competition sponsored by Deloitte is an excellent way to display and develop your professional skills. The deadline to submit these abstracts is Friday, January 25th, 2019 by 4 PM CST.

We will be collecting school pennants at the regional meetings to create a wall of schools at the 2019 Annual Meeting. There will be a drop-off box at registration.

We look forward to seeing you there!

Cancellation policy: Cancellations made prior to Friday, March 15, 2019, will be refunded. Cancellations received after this date and no-shows will not be refunded. If you encounter an emergency, please contact the conference planner at beth.fulk@aicpa-cima.com and the request will be forwarded to the Executive Director for refund approval.

HOTEL, TRANSPORTATION, THINGS TO DO

*To receive the group rate, please indicate that you are part of the 2019 Beta Alpha Psi Midwest Regional Conference.

Self-parking is $21 per day per vehicle

Alfonzo Alexander serves as Chief Relationship Officer of NASBA and President of NASBA’s Center for the Public Trust (CPT). As Chief Relationship Officer, Alexander leads the Office of Relationship Development, where he provides strategic leadership to NASBA’s Communications, Marketing, and Meetings Departments. He also oversees the leadership development, employee engagement activities, diversity and ethics compliance for the organization, while facilitating special projects working with the CEO.

Alexander became President of the CPT in January 2012. As the CPT President, Alexander leads this ethics and leadership organization’s day-to-day operations and the growing number of CPT programs. Under his leadership, the CPT has established new partnerships and built programs on nearly 100 college and university campuses across the United States, established Ethical Leadership Certification and Training Programs, and grown its Being a Difference Award Program.

Alexander joined NASBA in 2006 as a Staff Director and Vice President of the CPT. In his early years at NASBA, he led several special projects and developed the CPT strategic plan. Prior to joining NASBA, Alexander served as the Regional Manager & Managing Director for the Southeast Region of INROADS, Inc. where he led operations and business development in Alabama, Georgia, Mississippi, North Carolina, South Carolina, Tennessee and Virginia. He joined INROADS as Managing Director of its Memphis office and experienced progressive growth throughout his tenure there. Before joining INROADS, Alexander held several leadership positions in operations management and human resources at the Quaker Oats Company.

In 2015, Alexander rebranded his consultancy to Proventus Leadership Group, LLC. Through this business, Alexander and his team provide leadership and strategic business consulting and training services for companies throughout the United States.

Alexander is a business school graduate of Tennessee Tech University. He also earned an MBA from Lipscomb University, and completed an Executive Leadership Program at the Wharton School of the University of Pennsylvania. He is also certified through several organizations as a facilitator and is a certified professional coach through Coach Training Alliance. In 2017, he received the Distinguished Alumni award from Delta Mu Delta International Honor Society in Business.

Alexander has a passion for working in the community. He is a member of Sigma Pi Phi Fraternity. Currently, he serves as on the audit and executive committees of the board of directors for the Memorial Foundation. He is the Immediate Past-Chairman of the board for the 100 Black Men of Middle TN. He is a graduate of Leadership Nashville. Because of his commitment to education, Alexander serves on the Board of Visitors for the Lipscomb University College of Business, the International Board of Governors of Beta Gamma Sigma, Metropolitan Nashville Public Education Foundation, and the Sponsor Advisory Group for the PhD Project. Additionally, Alexander is a board member for the New Level Community Development Corporation, Fellowship of Christian Athletes of Middle TN (Past Chairman), Youth Encouragement Services (Advisory Board & Past President), and is a former member of the Metropolitan Nashville Sports Authority Board of Directors.

NEW Service Activity! This year, we will be partnering with the Foundation for Hospital Art. This organization’s mission is to give comfort and hope to those who suffer in hospitals by providing artwork at no cost to hospitals. All students, faculty advisors and professional partners are encouraged to stop by the registration area to paint on pre-drawn, color coded canvases. No artistic experience is needed! Once completed, all canvases will be donated to hospitals. WSCPA values our fellow membership organization for their key contributions and commitment to the accounting and finance professions. From community service projects and hours that aid their communities through initiatives like VITA, partner volunteer days, student peer tutoring, or financial education they demonstrate their commitment to advancing students, building networks and serving the community. All of these demonstrate the professionalism and inherent traits we see in our CPA community. Thanks for building the next generation of professional leadership!